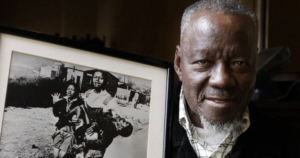 Photo by Denis Farrell/AP/REX/Shutterstock (6968635a)
Sam Nzima South African photographer, Sam Nzima, poses with his iconic photo showing 13-year-old Hector Pieterson, being carried after being shot by police during the 1976 Soweto uprising. The day was a key moment in the long campaign to end South Africa’s harsh apartheid system of white-minority rule. Forty years ago, black students in Johannesburg’s Soweto township marched in protest and some were gunned down by police, appalling the world
South Africa Uprising, Pretoria, South Africa