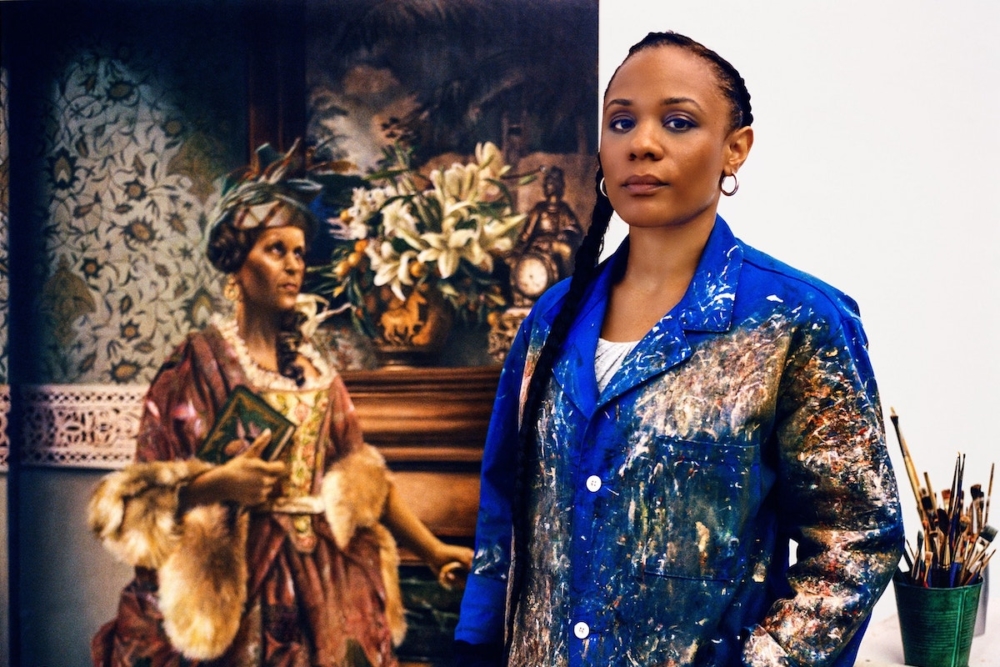 A rainy morning in Paris in 1863. On the wet cobblestone street, a handsome black woman in a colorful head wrap, carrying an umbrella, is looking straight out from the canvas.

I’m in the studio of Elizabeth Colomba, a French-born, New York–based artist, and this is the painting she’s just finished. Slightly behind the central figure, a horse-drawn coach carries a well-dressed white man, holding a bouquet of flowers. To her left, a pink-gowned young woman and her tiny dog are about to enter a building, and in the background, a nanny and two little girls are heading for a park. The black woman’s name is Laure, and she is on her way to the studio of Édouard Manet, who is using her as the model for the maid in Olympia, the landmark painting that shocked Paris and announced the arrival of Modern Art.

Colomba’s painting could have been done in the 1860s. She’s a new kind of history painter, an attractive, shy, yet highly ambitious artist in her 40s, telling stories about black women—usually real but sometimes imagined—who lived in earlier eras. Her career to date has been largely under the radar, but, like Manet’s Laure, she’s on the verge of being discovered. With our increasing interest in racial identity, her current focus on redefining the role of black figures in Western painting history is catching the art world’s attention. As the maid in Manet’s Olympia, Laure is presenting a large bouquet of flowers sent by a client of the naked courtesan who lies on a flotilla of white cushions. (These are the flowers we see in the horse-drawn coach.) A great deal is known about the courtesan: She is Victorine Meurent, a favorite model for Manet and Degas, and an artist herself. (She’s the subject of Manet’s Young Lady in 1866 and the nude in his Le Déjeuner sur l’herbe.) Dissertations and novels have been written about Victorine, but until now, her black counterpart in Olympia—which is actually a double portrait—was anonymous.